END_OF_DOCUMENT_TOKEN_TO_BE_REPLACED

Where are We? Racism in the Church 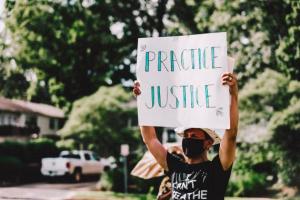 Pastor Munoz, associate pastor at Seabrook church, participates in a march for racial justice. Photo by Peter A. Roberts

While recent racial incidents may be easy to ignore, or explain away by some, their impact, combined with memories of historic cases of racism, still reverberate in the church.

“We can’t pretend that there aren’t issues in the church,” says Renée Battle-Brooks, executive director of the Prince George’s County Human Relations Commission in Maryland. She serves as the chair of the recently formed Columbia Union Task Force on Racism in the Church. The task force was formed to help conference presidents gain better understanding among all the races to study disparities and issues.

These issues are exemplified when a white pastor denounced the work of white supremacists in a sermon and three church members walked out. These issues also show when a black pastor became the lead pastor of a large, influential church, and a member chose to leave, accusing the pastor of preaching false teachings, but later saying they voted for President Obama and tried to give a “black senior pastor” a chance—two real examples from the Columbia Union the last 12 years.

The church has faced internal racial issues over the years. What many don’t know is the participation in the abolitionist movement by the early church pioneers. Joseph Bates founded a local abolitionist society. John Byington, the first General Conference president, hosted an Underground Railroad station at his Upstate New York farm.

In Testimonies to the Church, Ellen White even actively advocated disobeying the federal Fugitive Slave Law that required people to deliver slaves back to their masters. Though issues still exist, there has also been progress, such as greater levels of diversity and representation in church leadership, on church governing boards and in more diverse congregations.

There are a growing number of Adventists working to advocate for social justice and healing. In June, following the deaths of George Floyd, Breonna Taylor and others at the hands of police, several groups met to pray, grieve and call for justice.

Noah Washington, the associate pastor of Allegheny East Conference’s Emmanuel-Brinklow church in Ashton, Md., was one of the organizers of the Community Prayer Vigil in June at Spencerville Adventist Academy (Md.). The event provided “an opportunity for people to emote, as well as to come together and pray for our country, pray for the families of the victims and pray for our country and police and policing ... and to get direction as to what God is saying during this time,” he says.

Students and staff at Washington Adventist University have recently been marching against injustice. One student, Jorge...

Tiffany Llewellyn, the founder of Adventists for Social Justice and a Maryland-based clinical social worker who focuses on communities of color and low socioeconomic status, believes the church must show accountability. This requires owning the past and present, she says.

That means listening, adds Battle-Brooks, who views reconciliation in terms of a relationship. “You have to be willing to listen to the other side, and even if you don’t agree ... allow the other side to air the hurt,” she says.

It requires truly living up to the characteristics of Christ.

“This is the standard,” Battle-Brooks says. “If we say we are reflecting Christ, there is no deviating. The God that I serve and His character does not say that as a woman I am inferior. It does not say because of the color of my skin I have to have things dumbed down.”

Yet, this is a moment where the church—which is made up of people—can do great good.

“This movement is so powerful because it’s not just black people,” said Tapp, referring to the protests, conversations and actions taking place in communities across the country. “Those supporting us now are going to walk away if we’re going to be reactive. It needs to be an effort that crosses all lines, all demographics. It’s not about race. It’s manifesting that way, but it’s much bigger than that. It’s a human issue.”

“There is need for us all to be inclusive, to evaluate how we do ministry and try to respect one another and honor each other as children of God, working together to advance mission and try to understand one another’s perspective,” adds Dave Weigley, Columbia Union president.

This article has been updated for clarity. Read these articles from the September/October 2020 Visitor: